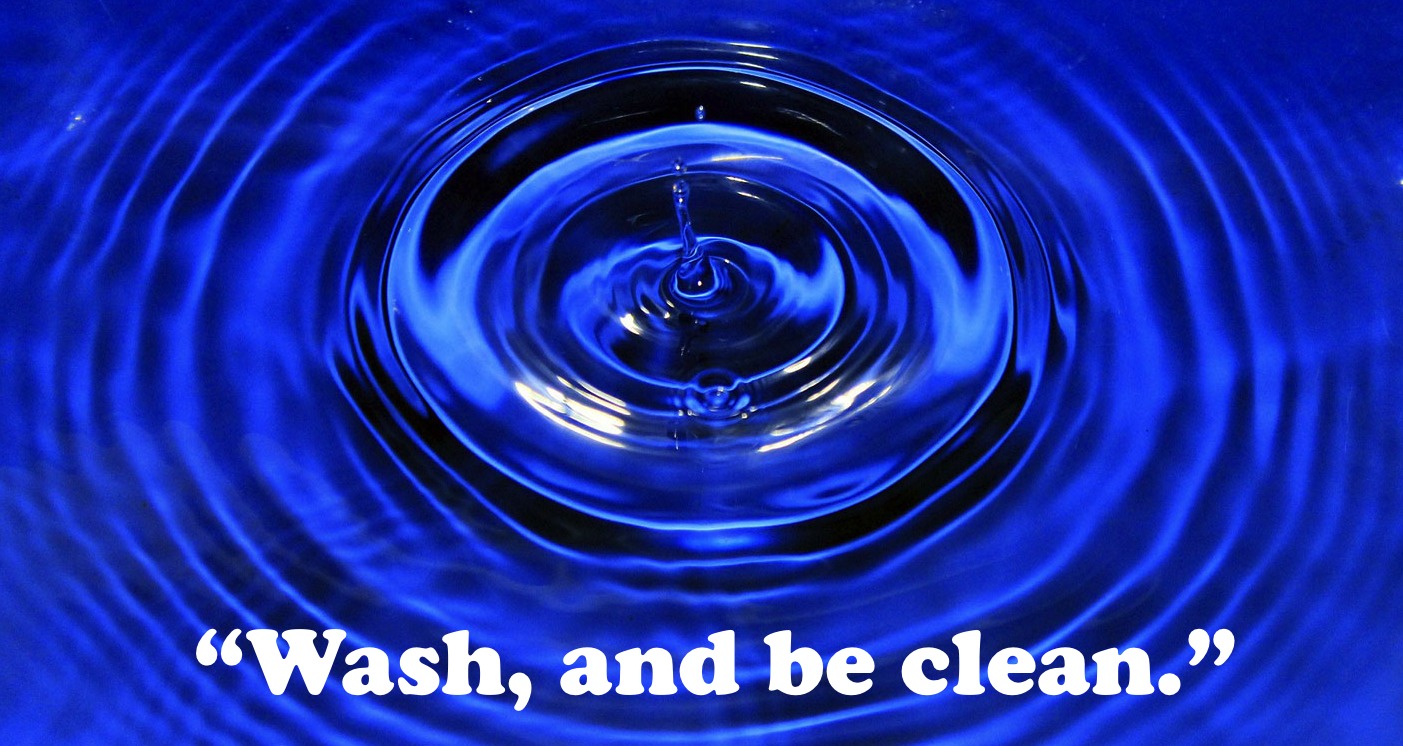 “Naaman, commander of the army of the king of Syria, was a great man with his master and in high favor, because by him the Lord had given victory to Syria. He was a mighty man of valor, but he was a leper. 2 Now the Syrians on one of their raids had carried off a little girl from the land of Israel, and she worked in the service of Naaman’s wife. 3 She said to her mistress, “Would that my lord were with the prophet who is in Samaria! He would cure him of his leprosy.” 4 So Naaman went in and told his lord, “Thus and so spoke the girl from the land of Israel.” 5 And the king of Syria said, “Go now, and I will send a letter to the king of Israel.”

So he went, taking with him ten talents of silver, six thousand shekels of gold, and ten changes of clothing. 6 And he brought the letter to the king of Israel, which read, “When this letter reaches you, know that I have sent to you Naaman my servant, that you may cure him of his leprosy.” 7 And when the king of Israel read the letter, he tore his clothes and said, “Am I God, to kill and to make alive, that this man sends word to me to cure a man of his leprosy? Only consider, and see how he is seeking a quarrel with me.”

8 But when Elisha the man of God heard that the king of Israel had torn his clothes, he sent to the king, saying, “Why have you torn your clothes? Let him come now to me, that he may know that there is a prophet in Israel.” 9 So Naaman came with his horses and chariots and stood at the door of Elisha’s house. 10 And Elisha sent a messenger to him, saying, “Go and wash in the Jordan seven times, and your flesh shall be restored, and you shall be clean.” 11 But Naaman was angry and went away, saying, “Behold, I thought that he would surely come out to me and stand and call upon the name of the Lord his God, and wave his hand over the place and cure the leper. 12 Are not Abana and Pharpar, the rivers of Damascus, better than all the waters of Israel? Could I not wash in them and be clean?” So he turned and went away in a rage. 13 But his servants came near and said to him, “My father, it is a great word the prophet has spoken to you; will you not do it? Has he actually said to you, ‘Wash, and be clean’?” 14 So he went down and dipped himself seven times in the Jordan, according to the word of the man of God, and his flesh was restored like the flesh of a little child, and he was clean.”

The formula was simple. A child could understand it. “Go wash yourself in the Jordan seven times, and you will be made clean.” However, the person receiving this simple formula was not a simple man. Naaman was a great general in the Syrian army. We know he must have been a great general because he was the commander of the king’s army even though he was a leper—despite having this terrible and dreaded skin disease.

Had Naaman been an Israelite, his leprosy would have forced him to live apart from everyone else. Apparently, as a Syrian, he did not have to live in quarantine—but his disease was still considered both hideous and incurable. According to our passage from Second Kings, he was willing to pay millions of dollars, if only his affliction could be relieved.

After a couple of twists in the story, Naaman arrives at the house of Elisha the prophet, millions of dollars in hand to pay for the cure he so desperately wants. But, guess what? Elisha won’t even come to the door! Instead, Elisha sends a messenger to give the great general the simple formula: “Go and wash in the Jordan seven times, and you will be healed.”

Well, Naaman is furious! What a snub! He has travelled a great distance to obtain a cure for his dreadful condition. He is prepared to pay a fortune for it, and—as one of his servants points out—he is willing to perform any number of difficult tasks to receive this gift from God. But all Elisha tells him is: “Go and wash in the river, and you will be healed.”

It was all too simple. Naaman thought Elisha was mocking him, trying to make him appear foolish. The great Syrian general—bathing in the muddy waters of the Jordan because a Hebrew prophet said so. Fortunately, Naaman’s servants manage to persuade him, and the Bible tells us that he emerged from the waters not only healed in his body, but also giving praise to the one true God of all the earth.

You know, I can sympathize with Naaman. Sure, he was an arrogant so-and-so ... but so was Elisha. And the prophet’s remedy really did seem too simple. Ridiculous, even! But it worked. Naaman was healed.

I don’t know about you, but I’ve done what Naaman did—over and over again. I’ve done the hard stuff and skipped the simple things. If something looked too simple, I figured it was unimportant—so I skipped it. I could do years of university-level theological study, but not bother with half an hour a day of silent prayer. Too simple to bother with. I didn’t bother with such things for years because they were so simple that I did not imagine they could have any value.

But when you think about relationships—whether with God or with another person—it’s the simple things that determine whether they are healthy relationships. If, in relating to your spouse, you put all your energy into the big events—the birth of a baby or an annual holiday or a Valentine’s dinner—but forget about the ordinary, day-to-day, little kindnesses ... Well, the relationship won’t last very long. It’s the ongoing small things—things that seem too simple to bother with—that keep the relationship alive.

You know, most of what we do in church—Sunday by Sunday—is relatively simple. In worship, we simply gather with our friends, sing some songs, say some prayers, listen to some Bible stories, spend some time in silence, maybe break some bread. All very simple stuff. Perhaps Naaman wouldn’t have bothered. Perhaps sometimes we wonder why we bother! But remember how Naaman was healed.

In between our Sunday gatherings, there are lots of simple little things that are easy to overlook, and not get around to. Prayer is one of those things. It ought to be part of everyone’s daily routine—and yet, I suspect that many of us try to make the weekly church service carry the weight of our entire prayer life.

However, much of the value of the worship service actually rests upon the foundations of regular prayer and Bible study that we build in to the rest of our week. Yet, strangely, most of us would find it easier to enroll in a demanding and expensive course on spirituality somewhere than we would to spend even 30 minutes a day reading Scripture and talking to the Lord. Those simple little things seem so unlikely to yield any benefits, and those big impressive things appear so much more promising.

But remember Elijah—who was Elisha’s predecessor and mentor. Elijah did not hear the voice of God in the storm or the earthquake or the fire, but in the sound of utter silence (1 Kings 19:11-13). And Naaman was not healed by paying millions of dollars and performing some great act of devotion. No. He was healed when he swallowed his pride and applied himself to the simple and the small.

The road to life in all its fullness is made up of a whole bunch of little steps, most of them seemingly insignificant—even irrelevant to our hoped-for destination. A dip in some ordinary water. Listening to stories from long ago. Some regular silence and prayer and study. Sharing ordinary bread and a shot of grape juice.

As Paul said in his letter to the Galatians (6:12-15), there will always be people trying to complicate matters by telling us we need to add this or that or the other thing—bigger, more impressive things. All that really matters though, Paul says, is that you are a new creation.

And as Jesus said once (Luke 10:1-11, 16-20), even though you might occasionally see some spectacular results as you minister for him, don’t make that the measure of your relationship with God. The real cause for celebration is that our names are written in heaven.

It might seem ridiculously simple next to watching Satan fall from heaven like lightning—or being able to cast out demons. It might seem too simple to be of any consequence ...

But remember how Naaman was healed. Remember, and do likewise.

Aug 7
'Babylon' is Going to Fall