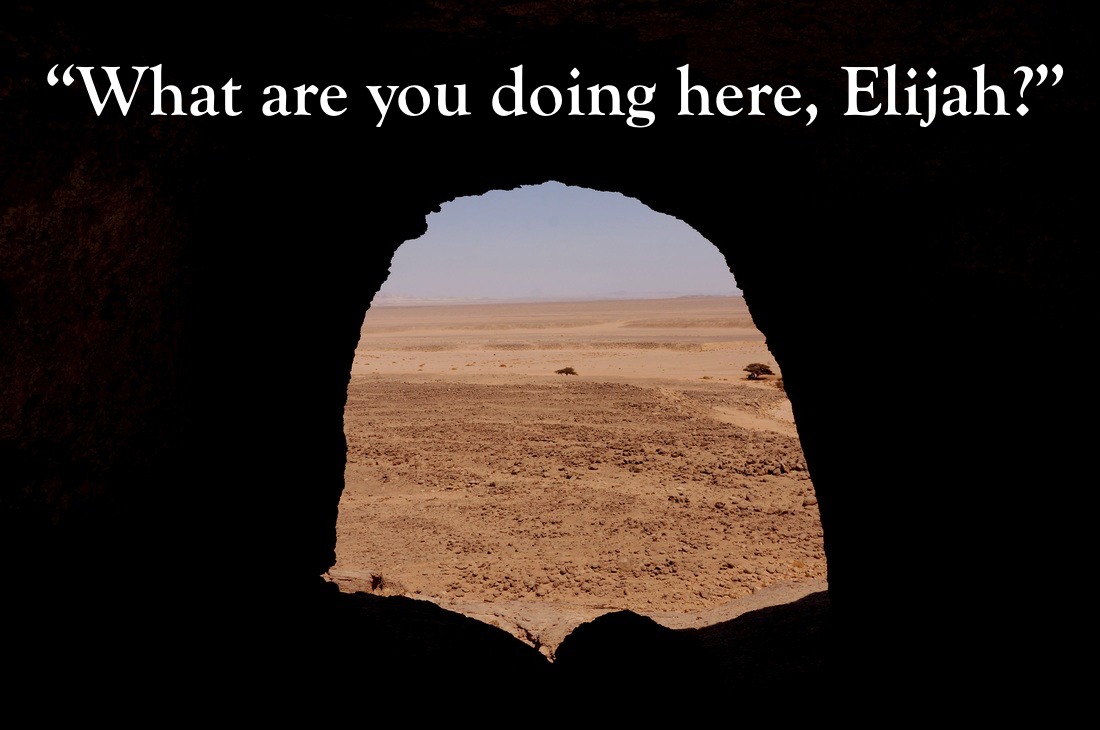 Ahab told Jezebel all that Elijah had done, and how he had killed all the prophets with the sword. Then Jezebel sent a messenger to Elijah, saying, “So may the gods do to me and more also, if I do not make your life as the life of one of them by this time tomorrow.” Then he was afraid, and he arose and ran for his life ... And he arose and ate and drank, and went in the strength of that food forty days and forty nights to Horeb, the mount of God.

Elijah was running from the reality of his life. Honestly, he was scared. Have you ever feared for your life?

Elijah had been zealous for God and had made some evil people very angry. See, there had been a contest between God and the gods of the people (1 Kings 18:17–40). In the end, God demonstrated that the other gods were false. When the priests of the false gods called upon them, nothing happened. But when Elijah prayed, God rained down fire from heaven. After that, Elijah and the people executed the priests of the false gods.

Now, Jezebel the queen was very upset about this. She vowed that she would do the same thing to Elijah that he had done to her priests. She said she would hunt him down and see him killed as well. That was the reality from which Elijah fled. He was running for his life. He had infuriated the powers of evil and they were retaliating. He was a marked man.

Real life for Elijah was that the queen wanted him dead. Elijah had called upon God, and God had answered his prayer with fire from heaven. But after the smoke cleared, he saw no sign of God remaining. All he could see was Jezebel’s murderous rage. So, Elijah panicked and ran.

You know, everyone who runs from something also runs to something; Elijah was no different. He was running to a cave in the wilderness on Mount Horeb, the “Mountain of God.” The wilderness, you remember, was where God had protected the people of Israel in the past. In the wilderness, God had cared for them, providing them with food and water. And in the Book of Deuteronomy, we read that on Mount Horeb God spoke to the people of Israel and gave them the law (Deut 5:22).

Elijah was afraid. He remembered that God had cared for the people in the wilderness, and so he fled into the wilderness seeking God. Yes. The wilderness. Where God had parted the Red Sea. Where God had accompanied the people in a pillar of cloud by day and a pillar of flame by night. Elijah was longing for a simpler time—a time when life was not so complicated. No Jezebels and false gods to deal with—just God’s people trusting the Lord to see them through the wilderness. God had spoken to the people from that mountain once, long ago, so Elijah ran back to the place of Israel’s childhood, the place where their Heavenly Father had cared for them in the past.

And when he got there, God said, “What are you doing here, Elijah? This is not where you should be. You should be proclaiming my Word and working my deeds in the face of evil, not running in fear of it.”

Elijah was seeking to escape from his present trouble by hiding in a comfortable past. Yet God was in the present, however disagreeable the present might appear. God was in the midst of the turmoil from which Elijah was running. God had been there all along, but Elijah failed to see it.

Elijah ran to hide from the reality of his life, but God met him where he was. Gripped by fear, he flew to the grotto of a familiar past. He was absconding from the present task that God had set for him. But God followed Elijah into the wilderness. And God cared for him there. And God spoke to him there.

God does not always communicate through awesome and miraculous deeds. More often, God speaks to us out of the mundane and ordinary. Elijah saw no pillars of cloud and fire in Israel. He saw no manna from heaven, no parting of the sea. He saw no divine hand carving commandments in stone. He saw no rocks gushing forth living water. So, Elijah ran to the wilderness seeking these things, hoping that God would comfort him in a troubled time. But God was back in Israel all along—not in burning bushes or pillars of fire, but in the commonplace. God’s voice was there all the time, quietly speaking in the silence of everyday life.

Many people today are running from reality, fearful of the responsibilities and tribulations of everyday life. We look around for burning bushes or pillars of fire, but we see none in evidence. Occasionally, we witness a flash of brilliance, a miracle, the hand of God. But after the smoke clears, all we see are life’s troubles bearing down upon us. So, we try to escape into materialism, or consumerism, or substances, or entertainment.

Even parents are tempted—tempted to run from their responsibilities to their families. Some actually leave. Some refuse to pay child support. The courts have to track them down to make them pay for their children’s bread. Those are the extreme cases, but many of us absent ourselves in other ways. We bury ourselves in our jobs. We flee to the lake or to the woods and hide there. We immerse ourselves in Netflix rather than have a conversation with our spouse. We get lost in cyberspace instead of interacting with our children.

It’s not just parents or spouses who do this, of course. In our society, I think, pretty much everyone is tempted to flee from reality. We look around and real life doesn’t look all that great. No burning bushes. No parting of the Red Sea each morning to get us going. All we see is the same old thing day after day. So, we long to escape.

Elijah shows us that God is present in the ordinary as much as in the extraordinary. Like us, he sought to evade his problems. To be sure, none of us has Jezebel’s army hunting us down. But at some point, we have all tried to run away from something, haven’t we? Elijah decided to run and hide in the past. He tried to find God by running away.

Then God appeared to him. Not in wind, earthquake, or flame, but in silence. Silence is nothing more than ... nothing. It is not a presence. It is an absence. It is the absence of voices and sounds. But it was in that absence of sound that God appeared and spoke to Elijah. God showed Elijah—and us—that our Saviour is always present. Even when there are no obvious signs of that presence.

So don’t flee from reality. Sure, you may have trouble seeing God at work in the humdrum of everyday life. I know I sometimes do. What does checking paperwork and navigating rush hour have in common with pillars of fire and smoke? What does macaroni and cheese have to do with manna from heaven? Where are the miracles of God in the routine tasks of living? Where is God, in our drab, prosaic lives?

Know this: God is there. We may only see him in brief flashes of glory. Like when a child says a prayer on their own for the first time. Or spontaneously gives a hug or a kiss. The responsibilities of life may seem devoid of burning bushes and pillars of fire. But God is present, even in the absence of spectacular things. God is in the small ordinary things. God even speaks through silence.

Therefore ... listen! Really listen. Listen for the low whisper of the Lord.

Did you hear it? God is speaking to you!