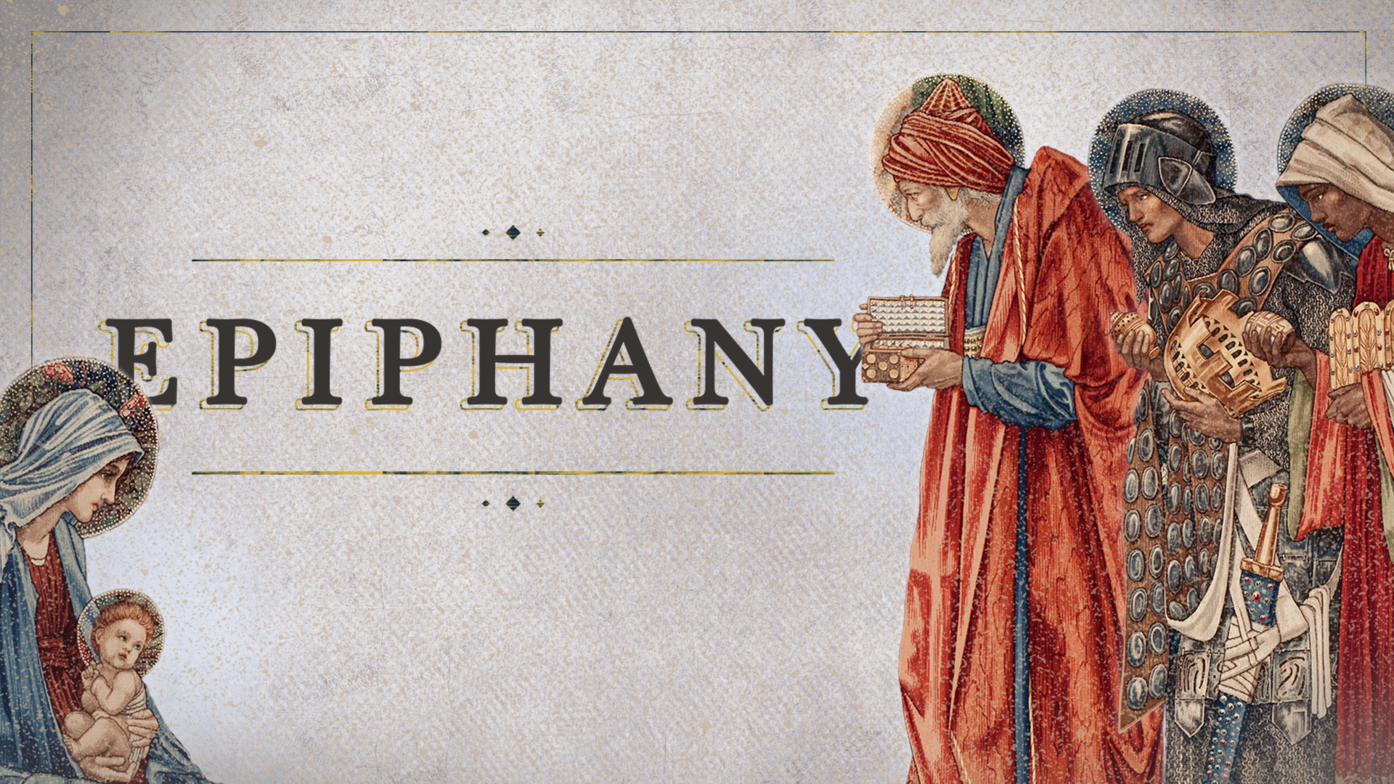 "Now after Jesus was born in Bethlehem of Judea in the days of Herod the king, behold, wise men from the east came to Jerusalem, saying, 'Where is he who has been born king of the Jews? For we saw his star when it rose and have come to worship him.'" (Matthew 2:1–2)

But, I wonder—for all of the liturgical colours, and all of the minor controversies about whether we should mention the wise men on Christmas Eve (since they probably didn’t visit Jesus until a year or two later) ... After a month of “Jingle Bells” and holly sprigs and and brightly-lit trees and shopping for gifts ... Are we any closer, really, to understanding what Christmas was all about?

Epiphany is our last opportunity to get it all straight before we enter a whole new season of emphases and reflections. Sometimes the meaning is right around the corner waiting for us, or hidden behind traditions we were led to believe were the real thing, but weren’t!

Enter the wise men. For all their wisdom—for all their cleverness in discerning the meaning of astrological phenomena—once they arrive in Judea, they start off on the wrong foot. And I mean big time! Still, when you think about it, it’s quite logical that they should appear in Herod’s court, asking: “Where is the child who has been born king of the Jews?”

Where else would you look for a new-born king, except in a royal palace?

Trouble is, the incumbent king of the Jews knows nothing about this birth. And he is none too pleased to discover that he has a rival. Those of you who’ve read a bit further in Chapter Two of Matthew know that Herod’s jealousy becomes very bad news for the male children of Bethlehem. Because, of course, that is where the infant king has in fact been born—not in a palace, but in a stable; not to a queen in opulent luxury, but to a frightened peasant girl in a stable.

The nativity account is a story of reversals. For that matter, so is the rest of the Jesus story. Because the baby in the manger grew up to be a teacher who turned everyone’s expectations inside-out.

However, such reversals breed animosity. Whether in families, or churches, or international affairs, such reversals lead—inevitably—to conflict. One individual or group thinks they should be in charge, only to discover that—when the dust settles—somebody else is calling the shots.

Now that the Christmas season is over, it’s worth asking whether what we thought was all-important was, in fact, all it was cracked up to be. This is not a new concern. Consider the Old and New Testament readings for today, from the Revised Common Lectionary (Isaiah 60:1–6 and Matthew 2:1–12).

First of all, Isaiah reminds us how Israel generally viewed God’s glory. It was about “bringing in” rather than “sending out.” The nations of the world (that is, the Gentiles) were expected to come to Jerusalem to discover the glory of the LORD: "Darkness may cover the world, but nations will come to your light. The wealth of the seas will come and the riches of nations; herds of camels will bring gold and frankincense."

If that sounds like a line from “We Three Kings of Orient Are,” that’s only because Matthew played up the connection. In reality, Isaiah wants to exult in dreams of triumph—in his vision of what the LORD is going to do for his people. Although the politics of conquest had long ago taken the sons and daughters of Israel into exile, Isaiah is forecasting a new era—one which will see them return (v. 4b) and use the best of foreign cultures to enrich and glorify their capital city. In a self-absorbed way, the returning exiles saw their country—and especially Jerusalem—as the centre of the universe.

If we took a modern concept like spiritual outreach and placed it back in the Old Testament, we would see that “evangelism” consisted of waiting for the world to come to God’s holy mountain. It required a physical in-gathering which involved the magnificence of the temple, the strength of kings and their armies, and a notion of justice that could only be understood from the perspective of God’s chosen people.

The Christmas story and the Gospels in general, however, turn this chauvinistic attitude upside-down. The glory of the LORD is not to be understood in nationalistic terms. It is not a glory reserved exclusively for any particular nation—however prosperous or powerful it may be. No. This is a universal message which transcends race, and nationality, and culture. As Matthew expressly states at the end of his Gospel, it is a message which is meant for all nations—and all peoples.

Today’s gospel lesson should help us claim the reversal that Matthew intended. The glory of the LORD is not to be found in calling people to us so much as in our sending people out to share the gospel—the good news that God’s love in Christ opens doors in every land and every culture. Wherever hope and forgiveness are being raised up in the name of Jesus, a universal spiritual movement is arriving.

There is another reversal that takes place in the story; and it, also, has practical application in our time. Even non-elected leaders worry that their power may be lost. Herod was a puppet king, placed in charge by the Romans; at any time, he could be overthrown by imperial whim or Jewish revolt. Herod’s position was tenuous, and he knew it. When his plot to find—and kill—the Christ Child fizzled, he turned to the politics of extermination, ordering the massacre of all the male children of Bethlehem (see Matt. 2:16). Such plots are common in history. Think of Pharaoh and his plan to kill all the Hebrew boys. Or the Chinese Communist party’s former policy of aborting female newborns and prohibiting second births.

Had all gone as Herod intended, his generals might have returned to report that all was well and the pretender to the throne was dead. But—as Robbie Burns so astutely observed: “The best laid schemes o’ Mice an’ Men, Gang aft agley.”

The Herods of this world come and go. But the eternal King of Kings reigns forever.

Such reversals are common in literature and there’s a very famous one, which I’m sure you all know. It’s a short story by William Sydney Porter ... better known by his pen name: O. Henry.

“The Gift of the Magi” is about two young lovers who are short of money, but who desperately want to buy Christmas gifts for one another. Unbeknownst to Jim, Della sells her most valuable possession—her beautiful hair—in order to buy a platinum fob chain for Jim’s watch; while unbeknownst to Della, Jim sells his own most valuable possession—his watch—to buy jeweled combs for Della’s hair.

On Christmas, they give gifts which appear—at first—meaningless. But of course, in reality, their gifts reveal them to be ... truly ... and profoundly ... wise.

The essential premise of this story has been copied, re-worked, parodied, and otherwise re-told countless times in the century since it was written. And there’s a reason for that: it’s because O. Henry’s tale has such power. It is a story of reversals, and its power is exerted upon us as we discover its meaning for our own lives.

These days, there are Scrooges and anti-Christmas politicians and secularists who oppose everything from nativity scenes and religious songs in public schools to the use of a phrase like “Merry Christmas.” And there are shallow souls who celebrate Christmas without having pondered even once the full and true meaning of the season.

Let it be our joy, however, to know that Christ was born for us—and for all. Let it be our joy to sing with the wise and the foolish that a life of love and forgiveness always triumphs over mean-spirited control-freaks.

Lord Jesus, may your light make clear our way, as once it guided the steps of the Magi. May we, like them, be led into your presence and worship you. Child of Mary, Word of the Father, King of kings, and Lord of lords; to you be glory forever and ever. Amen.