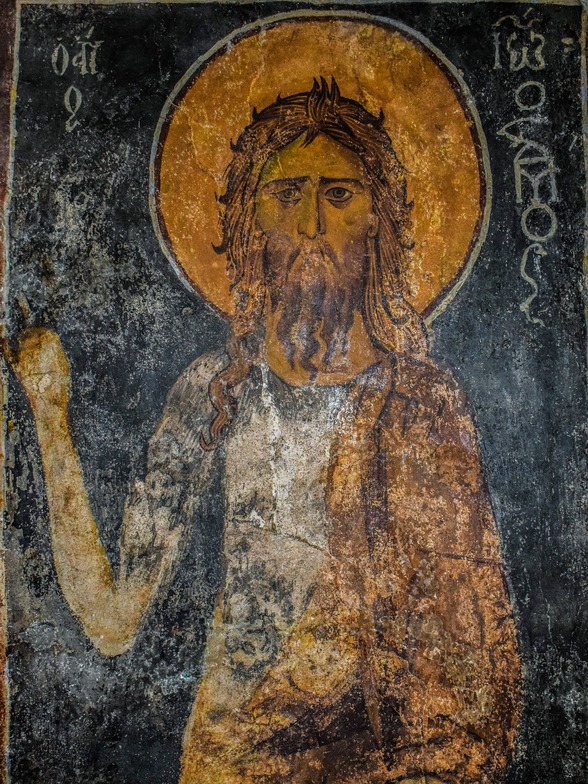 In the fifteenth year of the reign of Tiberius Caesar, Pontius Pilate being governor of Judea, and Herod being tetrarch of Galilee, and his brother Philip tetrarch of the region of Ituraea and Trachonitis, and Lysanias tetrarch of Abilene, during the high priesthood of Annas and Caiaphas, the word of God came to John the son of Zechariah in the wilderness. And he went into all the region around the Jordan, proclaiming a baptism of repentance for the forgiveness of sins. As it is written in the book of the words of Isaiah the prophet,

"The voice of one crying in the wilderness:
‘Prepare the way of the Lord,
make his paths straight.
Every valley shall be filled,
and every mountain and hill shall be made low,
and the crooked shall become straight,
and the rough places shall become level ways,
and all flesh shall see the salvation of God.’"

Consider John the son of Zechariah the priest. Consider John the Baptist. Part Old Testament prophet, part hellfire-and-brimstone revivalist, John emerged from the desert to call God’s people to repentance. To urge them to “prepare the way for the Lord” by setting things in order—in their hearts, and in their lives.

Luke’s gospel declines the opportunity to describe John’s wardrobe ... but Matthew (3:4) and Mark (1:6) paint quite a vivid portrait of him; they say he wore a garment of camel’s hair, and a leather belt around his waist. They also tell us that John’s diet consisted of “locusts and wild honey.”

Picture that, if you can. His clothing is rougher than burlap, and neither it nor John himself has been washed since ... well, possibly never! He’s got bits of grasshopper wing stuck in his teeth, and he is so tough that even bee stings don’t make him flinch. John of the Desert is a character! He is one of a kind. He’s a “one-man show.”

Yet, after he emerges from the wilderness and bursts upon the scene in Israel, he manages to attract some followers. And his preaching style—or, perhaps, the whole spectacle that is John the Baptist—never fails to draw a crowd.

As chapter three of Luke continues, we read:

He said therefore to the crowds that came out to be baptized by him, “You brood of vipers! Who warned you to flee from the wrath to come? Bear fruits in keeping with repentance. And do not begin to say to yourselves, ‘We have Abraham as our father.’ For I tell you, God is able from these stones to raise up children for Abraham. Even now the axe is laid to the root of the trees. Every tree therefore that does not bear good fruit is cut down and thrown into the fire.”  (Luke 3:7-9).

“Repent—or be destroyed!” Clean up your act—or face the dire consequences. Do not expect your religious traditions to save you. Bear the fruit of righteousness, or prepare to be cut down like weeds, and burnt.

That’s a pretty blunt message, isn’t it? You wouldn’t think many people would want to hear it, much less respond to it. So how does the average person on the street regard John’s preaching?

Well—as Luke tells us a bit later on in chapter three—most of them begin thinking he must be the Messiah!

However, John himself knows better. He answers them all, saying:

“I baptize you with water, but he who is mightier than I is coming, the strap of whose sandals I am not worthy to untie. He will baptize you with the Holy Spirit and fire. His winnowing fork is in his hand, to clear his threshing floor and to gather the wheat into his barn, but the chaff he will burn with unquenchable fire.” (Luke 3:16-17).

Those of you who’ve read a bit further in Luke know that—even though John at first endorses Jesus as the Christ—he later comes to have his doubts. After John is locked up in prison, he hears reports about the stuff that Jesus is doing. And there doesn’t seem to be very much “winnow-forking” or “burning of chaff” going on.

So John sends his own disciples to Jesus to ask him directly: “Are you the Messiah, or not? Are you the one we’ve been waiting for, or should we look for somebody else?”

And the message Jesus sends back is: “Go and tell John what you have seen and heard: the blind receive their sight, the lame walk, lepers are cleansed, and the deaf hear, the dead are raised up, the poor have good news preached to them” (Luke 7:22).

Luke doesn’t tell us whether John was satisfied with that answer. I think there’s a good chance he was not. Jesus, you see ...

Well, Jesus simply was not the kind of Messiah John was looking for. Instead of booting the Romans out of Palestine, Jesus urged non-resistance. Instead of casting sinners into unquenchable fire, Jesus forgave them. He accepted them and loved them, even before they bore any “fruits worthy of repentance.”

Poor John. He must have been mystified and perplexed. Unable to make sense of it all. At a loss to explain Jesus’ behaviour.

And then John’s one-man show came to an end ... with his head served up on a platter.

Here’s the problem with being a one-man show: you really don’t get a lot of outside input. And perhaps you don’t pay a lot of attention to the advice you do get—or to opinions that differ from your own. It looks to me that such was the case with John the Baptist. Because, you know, it’s not as if the Hebrew Scriptures were silent on the question of who the coming Messiah would be, or what he would be like.

For one thing, there’s that Old Testament prophecy from Zechariah (9:9) that we usually hear on Palm Sunday—the one that says the coming King will ride into town on a donkey, not a war horse.

And then there’s that famous passage from Chapter 53 of Isaiah (vv. 1–7), which tells us that the LORD’s anointed will have “no form or majesty that we should look at him, and no beauty that we should desire him,” but rather will be “a man of sorrows and acquainted with grief”—one who will be “pierced for our transgressions” and “crushed for our iniquities.”

Not exactly the conquering hero John had envisioned. Jesus was the furthest thing from a bloody warrior.

Maybe our own preconceived ideas about the coming Christ are as skewed as John’s were. Maybe. But we should know at least a little better, because we have the benefit of hindsight that John never got to have. He did not live long enough to see how the Jesus story would play out. He never got to witness the empty tomb of Easter morning, or see—in the risen Christ—the ultimate victory of pure love over violence and hatred; the triumph of mercy over judgment.

But we know how the gospel story ended. More than that, we know how the drama of salvation has unfolded through the centuries—and continues to unfold in our individual lives.

Also, we have heard the witness of Scripture concerning ourselves—that we are now “the body of Christ” (1 Cor. 12:27) and individually “members one of another” (Rom. 12:5).

My friends, real Christianity is not a one-person show! Authentic discipleship calls upon all of us—and really needs all of us—to take part, to contribute, to work together for the common good. And this stuff is not about fine points of theology. No. It is about action. Not usually bold, flamboyant, high-profile action, but rather ... It’s about humble service. Simple actions, carried out in love, for the sake of “the last and the least.”

May God enlarge our loving hearts, and expand our compassion, and subdue our pride and selfish ambition, so that—when our Lord comes—we may not only recognize him, but also genuinely welcome him. May it be so. Amen and amen.